VIII. Deep in the Heart of Texas

It started in Austin, where we stayed in the luxurious Habitat Suites, for variety. It featured shade-grown coffee, lights that took a long time to turn on and were dim when they did, and rain barrels. They claimed to use green energy. Breakfast was all organic. And the garden, the garden! It had beets, spinach, chard, kale, rosemary, marjoram, sage, pomegranates, figs, lemons, oranges, and edible flowers as well. In fact, the garden was entirely edible except for the very poisonous and unlabeled laurel tree in the middle. When we were invited to "eat the garden," Micah beat out my "I'm never leaving this place!" with an "Oh great, I'm going to have to remove you from here bodily, aren't I?"

So we got a late start. 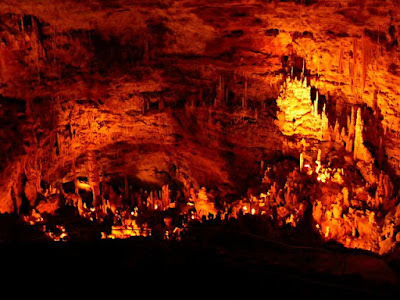 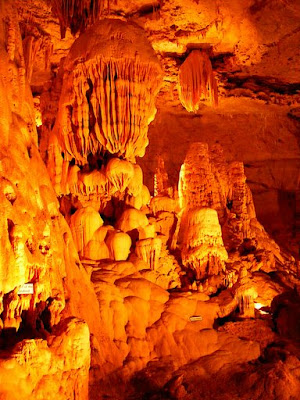 We headed out towards San Antonio and to the Alamo, and got waylaid by the largest natural caverns in Texas. We toured through the humid, rocky underbelly of central Texas, where water encourages rocks to grow, but ever, ever so slowly. It turns out that Micah knows a good deal about geology, possibly due to some unconscious push from his own name. What's in a name? Advertising, that's what. 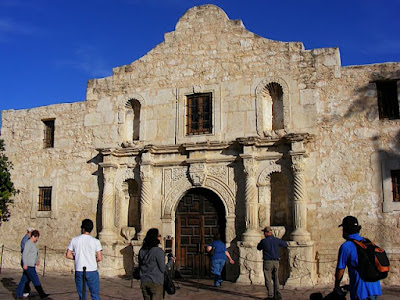 And from there we took another side trip to Bandera, a town where it is said that cowboys still come in from the field for an after-work drink, and tie their horses up outside the saloon. It is said that this is the case; it is no longer fact. Bandera is a cute town where everything is cowboy-themed, stores bear names like "Jessi Jane's Outlaw Fashions," and there are John Wayne posters everywhere—except for the diner's bathrooms, which are wallpapered instead with kittens-in-cowboy-costumes. It may be that representations of cowboys are anathema to actual ones, so had there been some here, it was long ago.

So we were late, real late, trying to make time across the oil fields of Texas. We had half a tank of gas and were coming up on a gas station. I said we might stop for gas, just in case, but instead of his usual "It's a good plan. I like it. Let's do it," Micah breaks with tradition and instead says, "What are the chances we won't hit another gas station in 160 miles?"

One hundred sixty five miles later, we have staked our hopes on a point four miles off Highway 10 called Sheffield. And although we are in a town that exists only to produce oil, there is no possibility of finding gasoline when we finally have to stop. Oil, oil everywhere, and not a drop to pump.

If this has ever happened to you, you might know that you start feeling what distance means. In a car, you can cover ground too fast to even be able to describe it. Without gasoline, the only option is travel on foot, which is nigh impossible. Quick as anything, you can be outside the range of safety, especially when you are headed through west Texas with only a half a gallon of water in your possession. Two hours from our last known gas station, and we have nothing of use. No fuel, not enough water, no way to safely shelter ourselves. Nothing. 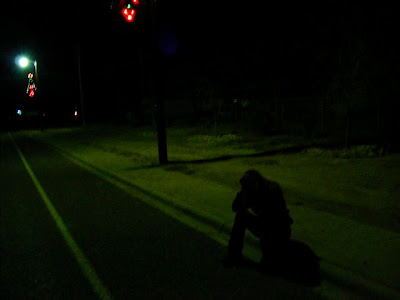 I begin to feel a bit blue. I start to feel like things aren't going to work out after all, and that I have failed us in major ways. It's cold, and dark for some hours yet. I lean against the car and try to take in the Texas sky through the dust. I try to think, but nothing comes.

Micah asks me if I'm okay. I reply that I don't know. I tell him I don't even know where we are. 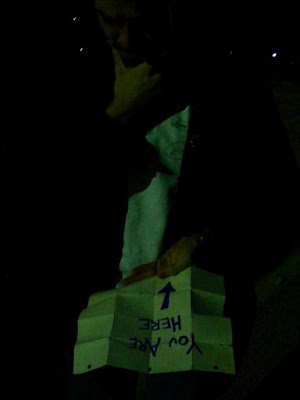 He gets out his all-purpose map that he carries around in his wallet at all times for just such moments. He shows me where we are on it. It's a piece of paper that has the words "You Are Here" written on it, with an arrow that points back to the reader.

"You're right. I guess we are. Let's take pictures."

We do, and we laugh about everything, and things turn out okay after all.

a detailed listing of things to be found in west texas between san antonio and el paso:


ps. t for texas is one of the best songs.