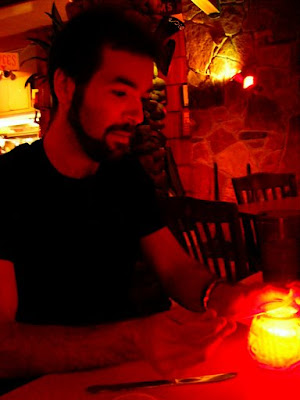 (by Micah, of course)

Take two cannibals eating a clown
Replace them with some other noun.
You'd think it'd choke
But instead you've a joke
That won't fail to bring the house down.

"Guardrail damage ahead," said the sign
But to my eyes, the guardrail looked fine.
It seemed a request,
So at its behest
I smashed that rail way out of line.

"Come eat our garden!" they said.
"Its plants will all keep you well fed!"
But the tree with the beans
Is not what it seems
And now I'm organically dead.

We drove to San Antonio
To go see the Alamo
It was rugged, no gilding
With a big gift shop building
Which I think I'll remember for sho'.

There once was a Texan gas station
Which we passed without utilization
Half a tank of gas later
There were no stations to cater
Which gave me humble pie mastication.

Music: Deep in the Heart of Texas (not the version I wanted, and also the video is ridiculously bad. Missing the lyrics "The sage in bloom/ is like perfume/ Reminds me of/ the one I love/ Deep in the heart of Texas.")
Posted by Erica at 10:50 AM