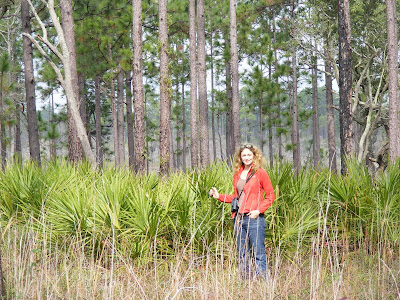 Have I mentioned that I like birds? I do!

I drag Micah to many out-of-the way places to be near birds that we may or may not have the slightest chance of seeing.

The Mississippi Sandhill Crane National Wildlife Refuge is closed, but we run into someone who works there.

"Where have the cranes been seen recently?" I ask. "Where will we have a chance of seeing the birds?"

The woman who works there looks like she's about to break some very bad news to me. "Well, you see, they're endangered… so they live in the center of the refuge, which is closed."

"What!? Are you trying to tell me that I drove all the way down here to see a bird that's endangered? Oh, well, forget this! I'm leaving!" I say in my mind. What comes out of my mouth is more along the lines of "We're willing to hike in."

"Well I can't tell you where to go. I'm not a biologist," she says.

"It's a good thing one of us is, then," I growl internally. "I should tell you that it's only your non-migratory subspecies that's endangered." I should, but I don't. Again, what leaves my mouth is: "Alright, I suppose we'll drive outside the refuge to look on the edges."

"Oh, that's a good idea, they've been seen on the edges. I even have a map of where they've recently been seen by private land owners." I think this woman has been put on this earth specifically to make life difficult for everyone else. Could it be that no one else has ever come to the Sandhill Crane National Wildlife Refuge requesting to see Sandhill Cranes? 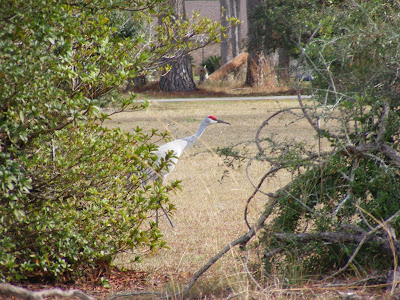 We drive the edge of the refuge. Micah sees two birds foraging on someone's lawn. They are both banded, and hide behind a bush when we get out of the car with binoculars. We stalk them along the roadside, and they peek their heads out to take a look at us. These are the first wild cranes I have ever seen, and I think these are the first wild cranes ever to see me. They dip into a pre-flight motion, run a few graceful steps with wings outstretched, and fly back into the refuge while giving their haunting calls.