Things are going well for me. I love my job, which I can describe as "pyrogeography," (--how cool is that?) and I think I am fitting in here. Nevertheless, I have been feeling a bit blue for reasons that I will get to shortly.

Myrtle Beach is on fire, and I should probably be writing about that. In other news, our lab put out another major paper in pyrogeography and global climate change (I was not involved in this, but I think it is great) that discusses how fire in the Earth system is not only increasing due to global climate change, but is also a driver of it. This is also something I need to get around to writing about more in-depth, but I have to say, I have been a bit too busy lately to put together coherent thoughts. So maybe it's a good thing I'm not writing!

Studying fire, its behavior, and its movement into new landscapes is fascinating. But I got into this field because I want to somehow slow down the extinctions we are seeing now. I want to think about fire in terms of habitat enhancement and ecosystem health. But fire driving climate change... this is bad news.

I have become rather obsessed with the problem of mass extinctions and trophic cascades. I keep going to talks that say that global warming by itself will wipe out 1/3 to 1/2 of all life by 2050, or that invasive species will do that on its own by then... that sea ice -- all sea ice-- may be gone by 2013. This is going to be a much larger problem for us than the extinction of polar bears. By the way, here's what they look like while they are starving to death: 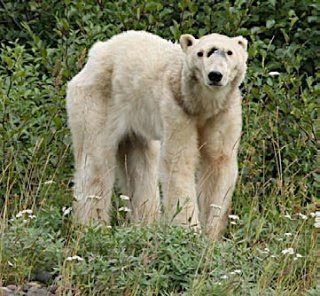 The point that all the scientists I talk to seem to agree on is that the changes we are about to experience are so large that we can't adequately predict their magnitude. For example, we can say that if we continue to release carbon dioxide at the same rate as we are doing now, the overall earth temperature will increase 4-6 degrees Celcius in the next 200 years. Even if we stop producing all CO2 right now, there's still a lag time in which the earth's temperature will continue to increase, and even at that lower level, there may be unpredictable events we are not accounting for, like a methane belch from the melting permafrost, or large scale fires that we can't fight but which produce enough CO2 in the short run to cause positive-feedback heating and what people sometimes call "runaway global warming," and sometimes call "global boiling."

Additionally, even though 4-6 degrees Celcius doesn't sound like a lot, the increased atmospheric CO2 in addition to the temperature change will cause almost all trees on earth to die. So in two hundred years, no trees. This is one element of the larger issue of "Tree Death." We are seeing increased tree death already, and in California, Sudden Oak Death makes the issue particularly visible.

The world is going to look very different quite quickly, and I don't know how I feel about being around to see it.

I got into this field because I love birds. But the problems are awfully big and hard to "solve." They're hard, on an emotional level, to even think about.

The earth has gone through major changes before. I guess I hate our current mass extinction so much because I think so much of it is or was preventable. Maybe I am wrong, and man, as an animal, is just unstoppably rapacious. I have begun hoping that whatever evolves next will bring back a large avian predator, like a Roc or a Pterodactyl.

I began a walking route to work that goes through the Valley Life Sciences building. They have a lot of interesting things in the hall there... one of which is a reproduction of the Archeopteryx fossil. 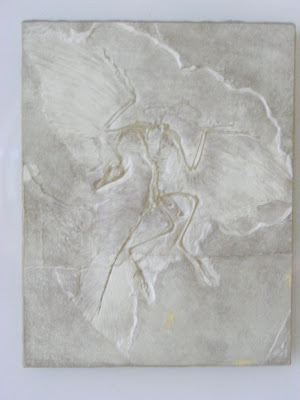 I love it. Look at it. It has feathers, but it doesn't have a beak like a modern bird. It's more lizardy. The position that it's frozen in, for all of eternity, is that of Icarus falling out of the sky. Maybe birds, having become too beautiful in flight and song and feathers and grace, have overreached somehow. Maybe they have outdone man in all but destruction, and are doomed to fall from the skies because of us.

When no one else is around I press my forehead against the glass and stare at the plate, and think.

The other attraction in the hall for me is the Pterodactyl. Boy do I love it. I could stare at it for hours. It looks like a big Kingfisher. Hooray Avian Predators! What a bird! 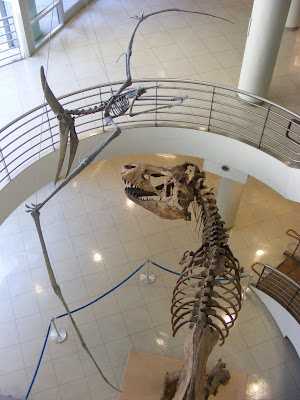 "I guess I hate our current mass extinction so much because I think so much of it is or was preventable." How specifically? If we care about this, what should we do? Wishing to not be around to see it is a cop-out. I think that humans are actually potentially the least rapacious species, because we have people like you who are capable of extending empathy out beyond our immediate offspring and even to other species who couldn't care less about us. The only thing that keeps my cats from killing and eating me is that I'm bigger than them. I don't think the blue-green algae felt much remorse about slaughtering most of the anaerobic bacteria by poisoning the atmosphere with all that free oxygen. So I ask you, how do we put the human moral imagination to work on not killing all the other macroscopic life?

Well, you raise some good points. That said, I think only part of the extinctions we are about to experience are now preventable. Albatrosses and sharks come to mind. These species could be saved with laws that have a global reach, maybe set up by CITES or some other respected international organization. Salamanders and global warming, frogs and fungus, tree death and insects? --Too far along already to stop.

As for me, I'm not excited about watching all my favorite birds and frog go extinct. The conflict here is that I feel bad about all this stuff and want to do something. If I didn't feel bad, I wouldn't try at all, but I might be happier. The fact that I feel that we are culpable for this and capable of small changes to the outcome pins me into a state of disappointment in the way things are now.

A lot of the solutions I see are not comfortable for people, and are therefore not going to happen in our current society. Limit everyone to 2 gallons of water a day. Put an environmental tax on the first world and buy all of the remaining open space in Africa, Canada, and South America. Reconnect all remaining open space in the United States by forcibly relocating residents into cities. Ban imports of all non-native plants, and outlaw lawns.

The changes that need to happen are considered too "radical" for most people. But I tell you they are not radical enough to prevent things getting much much worse for people and wildlife everywhere as we enter what scientists are terming the "Anthropocene Epoch."

Nevertheless, I want to be part of a better outcome. I'm thinking about it.

Some thoughts (Cause I has brain):

-Building preserves or farms to attempt to stave off full extinction of these at-risk species.

-Controlled desalinization in regions of the globe where it would be beneficial it times of drought.

-Colonize Mars (Yes, it sounds a bit silly but damn our over population!)

That said, I shall continue to enjoy every sunrise and sunset I get in this life. **HUGS**

First, non-natives absolutely should be prevented from being imported. Flora or fauna. It's all unnecessary. Plus, that sort of action wouldn't cost untold billions or need international cooperation that doesn't exist in real life. Yet.

Yes, your ideas might help as a solution, if they wouldn't cause a massive backlash that would prevent any progress or any cooperation from the general public. Don't you tell me I have to relocate to a city. I'll rebel. And like it or not, we can't just tell landowners what they can or cannot do with their land within reason. Yeah, I hate lawns. Now educate others to hate them, too.

So it starts with education.
Treating ecology (and within that, habitat/wildlife management) as a science that deserves all the recognition that physics, chemistry, "biology", and human anatomy receive beginning in high school or earlier. That'll be the difference. It's not just some hippie tree-huggin' activist freakshow; it's *important*. People can't just know it innately, though. Most people live in cities. They need to learn it. More people go to high school and college, so we must start there.

South Carolina is beginning a joint effort between their conservation agency and their education system to start ecology magnet schools throughout the state. How cool is that?

Personally, I'm an unfeeling bitch. I think we should limit reproduction in our human population. Period. How's that for offending the public? But really, that's the solution that will work. We cannot continue to expand at this rate, feed those offspring, shelter everybody... while also protecting wildlife habitat. Only replace yourself if you reproduce at all, and don't reproduce if you're biologically or financially unable. How's that for simple?

Oh, and the pterodactyl? Very much not a bird. :-P