So, right. No updates. This is because I am trying to write something about the Australia wildfires, settle into my new job and home, and survive the California DMV.

These days, I would say I am homesick for North Carolina. Don't get me wrong, California is great. But North Carolina has a lot of character you don't find elsewhere, and I miss being there.

While I am working on my Australia piece, I'll post a piece I wrote about grabbling in NC.

What do you do in a small Southern town at nights and on weekends? I believe there is a bar in town, but I have still not spent any time exploring Rockingham beyond finding its Chimney Swifts. There isn’t a movie theater, that I know. Nights at home can be fun when the other biologists are staying here, and sure, there’s always Seventeen-Frog Pond (now featuring 21 species of frogs and toads!), but at this time of year the frogs are mostly hanging out under the mud, and even field biologists need to go out and see people once in a while. So while we wait for the NASCAR raceway to reopen, I pass time with other local sports. 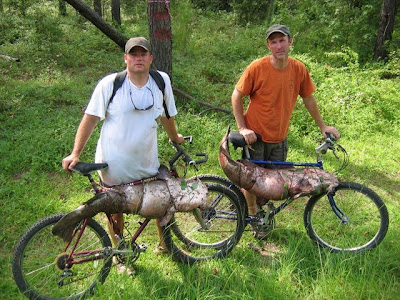 Lincoln invites me out mountain biking. Though I have no talent or ability in this, and no pressing desire to exercise in hundred-degree weather, I am promised a swim in the river, and this is the Diggs Tract we’re discussing here. “I’m taking you grabblin’”—says Lincoln.

We fill a chest full of ice, some water and a few beers, and head out to the river from work. We park Lincoln’s white pickup as far out of sight as possible, and offload two mountain bikes. He says we’re going to get the catfish back up the path on the bike, tied lengthwise to its side, or carry one in the backpack, tail flapping out the top if we get two. He tosses me a length of rope, and we bike many miles over pebbles and rocks and clay and torn up ground, through the oppressive humidity and down to the river.

Lincoln cuts a straight branch and whittles the end into a sharp point with the case knife he carries on his belt. He hands me this makeshift spear, and I strap it to my back with the rope. I think the idea is that if we find one of these monster fishes, we are going to poke it with the stick. This sounds like a plan put together by a four-year-old, but since I don’t have a better one, I assent. We leave whatever clothing we can do without, the backpack and our water bottles in an out-of-the-way wooded cove.

We float down the river on our stomachs for about an hour, arms and legs spread out, hands roving through the water to sense the sharp and unexpected architectures of the riverbed. Sometimes the water is deeper than we can stand in, and then all at once, we are crawling over a rocky landscape just inches from the surface. The rock drops away, and we are once again floating in unknown depths. The water is warm and the air is warmer. Sweetgums and oaks and poplars crowd clay banks that sit opposite one another at a distance of one hundred fifty meters. This year’s drought, combined with the previous year’s, layered on the one from the year before that, has dropped the water level down many feet from where it should be, and so the gentle push of the river is no threat to us. Sometimes a grabbler will get carried away downstream, and you hope he hauls out safely, as you dare not follow his lead. But the current is lazy, and the sun is shining. The world seems simple and beautiful. It is a moment in which I can’t think of anything I would rather be doing.

During our float, Lincoln explains that the spear is used to antagonize the fish. Occasionally you find a catfish that does not want to bite you, and if you are committed to a successful grabbling encounter, you need to punch and prod the fish until it is angry enough to swallow your hand and hang on. The next part is a battle of strength as the fish tries to retreat with its living bait, and you try in earnest to retrieve your ingested limb. The catfish may hold you underwater. It may break your wrist when it thrashes. It may try to pull you into its den. The rock that the fish lives in will bump and thump and boom and rumble, though it may be solid throughout and weigh more than a ton. The rope is reserved for occasions when you win. You string one end of it through the mouth and gills of the fish, and the other around your waist. You swim back up the river, and the fish travels behind you as docile and fine as a water-breathing lapdog. 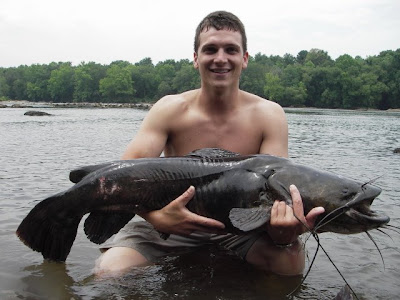 Lincoln shows me a flat-topped rock as big around as a picnic table, which sits just below the water line. He calls it Lost Rock. He drops underwater, spends about a minute probing the cavity, making sure that there is no fish underneath. He surfaces and tells me it’s my turn.

“I don’t want to do this!” I balk. “This is a terrible idea! And I don’t feel like drowning today,” I pout. I am experiencing a sudden change in mood at the prospect of provoking a leviathan to attack me in an environment where I cannot see, nor hear, nor breathe. I have Lincoln’s assurance that the fish is gone, but I am not confused about the value of a trickster’s word.

“Young lady”—says Lincoln—“if you don’t dahv down there and stick your hand under that rock, ah will drown you mahself.”

I weigh my options, and find them exactly equal. I decide that I might rather take on an unknown beast than irritate Lincoln, who is sporting a serious look. I drop onto my belly underwater, and he stands on my back to keep me there. At the base of the rock is a hole, and I feel around the edge of it with my spear. The opening is about the size and shape of a fat, swaybacked dachshund. I stick the spear in and encounter nothing. I thrust the spear in the other side, and still nothing. I wave it back and forth. More nothing. I put my hand in. Nothing.

At this point, I am less surprised by the absence of the fish as by the vastness of the expanse beyond that opening. The space is rocky, but wide, and it reaches upwards towards the surface. It is an underwater cathedral I am exploring, blind. There is space under this rock—cavernous, unbelievable space. A person could fit in there easily, maybe even two. It would be nothing to load dachshunds into there, one after another. It’s this kind of permanently dark, hidden room that a Flathead Catfish seeks out to live in and lay eggs. I have an underwater sense, like smell, of a swampy, rank fishiness of the previous resident.

Lincoln is standing on me, and I am out of air. I pause for an extra moment to consider the possible outcomes of this situation and question, as always, the wisdom of my actions. I struggle under his feet, and he lets me up without testing me. Though unpredictable, Lincoln sometimes chooses to play big brother to me and has at times shown kind concern for my safety. I’m not going to drown today, which is good, because I’m about ready for that beer.

“You smell ‘im?” —Lincoln asks. I nod. I gasp for breath—“Do catfish just keep showing up here when you take one out?” A nod from Lincoln. “Why?” I demand excitedly. “Underwater, it’s still just lahk the forest. It’s cavity-limited,” says Lincoln. I think of all the birds and squirrels and raccoons and opossums and bats fighting for the few hollow logs that seem to be out there, and I wonder with new interest at the life of a fish.

We visit another grabbling rock, which has a cavity about like a rugby ball. Blue Rock also lacks an occupant, as does Great Rock. It’s late in the season to catch a catfish, but this fails to trouble me. I call it a grand success that I have not had to kill a fish with my bare hands, or haul forty pounds of dead-weight back up the hill on a bicycle. Let these non-native beasts sit and eat up all the other little fishes until someone else comes to grabble them.
Posted by Erica at 1:22 PM