"This is getting expensive," I say to my boss, Jeff. "My pens keep exploding in the field. It makes me think I should taking data in pencil, like you've been bugging me to all season."

"Eh, don't bother," he says. "My mechanical pencil melted into a C-shape over my dashboard, and I can't use it."

How hot is it? It's too hot to burn! Not for the people, though. No one seems to care when the fire technicians faint. It's too hot for the trees. So burn season is over for now, and except for the occasional wildfire, we are done setting and fighting fires until December. This letter is a sketch of prescribed burning on the Gamelands.
----- 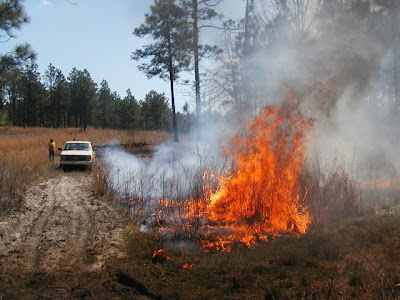 There is always a lot more destruction in conservation than any practicing conservationist is likely to tell you about. It can be embarrassing to admit what really goes on. I'm not just talking about the small stuff, like how we run over young oak trees at high speed in our trucks for that great "splat" noise they make, or dare one another to kick open fire ant mounds and try to outrun the swarm that pours out of the break. There is much larger-scale destruction involved in what we do, and although it is necessary, it can be challenging to accept. Appearances are that we get funded to do exactly what we want people in the rest of the world to stop doing, that is, cutting down trees and burning what remains. When you think protection and preservation, you generally don't picture the conservationists enacting wholesale destruction of functioning ecosystems by poison, by mowing, chopping, slashing and burning, but that is exactly what we do. We call it ethical and scientific, and it is the only way to keep a fire-dependent ecosystem going.

Open-canopy pine savanna used to be the predominant ecosystem here. The one percent of it that still remains is partially contained within the Sandhills Gamelands where I work. A pine savanna is a few pine trees scattered around a big, wavy grassland of gold and green, where the sunlight reaches the ground, and there are barely any shrubs or woody debris of any sort. At first glance, all you see is grass and a few trees, but this particular ecosystem is the most biodiverse in North America. Many of the species here are quite rare, and exist only here, or maybe in one or two other places nearby.

With fire suppression, trees crowd in and close the canopy, so that you lose the grasslands and everything in them. The survivors are trees and deerflies, and it doesn't take a lot to see that the ecosystem is extinct under that tree monoculture. If your goal is to restore the pine savanna, the solution is to thin the trees and encourage the grass understory to recolonize. This process involves cutting down over half the pines, and removing, by fire or by roller-chopping, almost all of the hardwood oak and shrub understory. You also need to let fire run through every once in awhile, as many of the plant species are dependent on it to reseed. Frequent fire also consumes the fuel load on the ground, and prevents wildfires from burning too hot and killing everything permanently.

It sounds good to restore fire-dependent ecosystems with prescribed burns, and it looks great. The vegetative response to fire is so strong that within two weeks, you can count over forty species of plants springing back up and even flowering, and within a month, you might not know that the site has been burned. But it's still tough to accept how much you have to kill to bring the ecosystem into this state.

On one of the fires in June, I watched a cavity tree burst into flames because it had not been raked, and lost my temper and judgment. A cavity tree represents many years of effort by many birds that excavate deep holes into a dead tree, and is, at this time of year, likely full of owl and woodpecker chicks. This is one of the specific bird habitats we are trying to promote, and there it was, burning up as I watched. I couldn't throw enough dirt onto the tree to put the fire out, and was burning my hands trying to do it. The Jakes stood on the side, knowing exactly how this was going to play out, saying nothing. I was yelling at them to set up the pumper truck and put out the tree. Brady tried to calm me down, saying that even if we were to douse the tree with water, the ground conditions were so dry and pine so flammable that it would keep setting itself on fire until it had burnt up. Which is to say, we were too late. There was nothing left to do but yell and cry, which is what I set about doing as soon as I could find solitude. The rest of the guys seem "burnt out," shall we say, on the destruction, and don't tend to lose their cool.

There is a calculus of loss that pervades prescribed fire conservation, and everyone deals with it in a different way. Some of the destruction can seem comical. During the Burn-a-Thon last winter, the fire crew was debriefed on "flaming bunnies." Tragic though they may be, bunnies that catch on fire pose serious problems. Flaming lagomorphs shoot out of the prepped area into adjoining blocks, catching them on fire as well, and then the fire crew has any number of wildfires to deal with in addition to their intentional one. The first time I heard this, I grimaced, and then laughed harder than I have in a long time. "Oh, it's funny," says JakeTwo, "but it's no joke."

Much of the sixty-thousand acre Sandhills conservation area gets burned in a three-year rotation in a patchwork of burn blocks, leaving enough viable habitat for nesting and wintering wildlife. The way a block is burned will depend on the wind and weather conditions, but usually the technicians light a "backing fire" along its windward edge. A backing fire is a low-intensity burn that eats away at the leaf litter slowly in the direction opposite to the wind. This creates a stopping edge for the main fire and a wildlife break for scared bunnies. You can just about walk through the backing fire when it is going, though I would recommend taking it at more of a run. Birds will continue singing up in the trees. After the backing fire has burned a good swath off one side of the block and created a burn buffer, the techs may light off a "head fire" on the opposite side of the site. The head fire is much hotter, and because it travels in the same direction as the wind, it can sweep through an area incredibly fast. The head fire will have up to thirty-foot flames, and can burn up small trees, brush, and dead snags.

Almost every day during burn season, we have these huge, set-on-purpose, sometimes out-of-control fires that send enormous plumes of smoke up into the sky and lay thick haze over the downwind landscape. The smoke is piney, heady, campfire-like, rich and aphrodisiac. I always drive to the plume to see the flames. In this attraction, I am no more complicated than a moth. 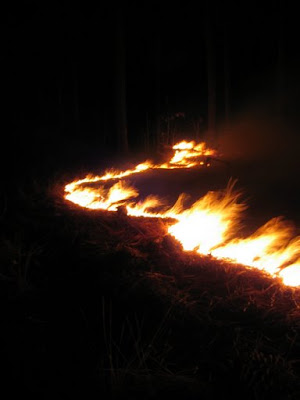 You can tell which of our two Fire Bosses is burning on any given day based on the quality of the smoke that rises up in an opaque column over some part of the horizon. Bill will burn between 50 and 300 acres at a time, and he burns hot and fast. The plume is dark and concentrated, and is gone in a matter of hours. Bill likes to light head fires, which will kill the larger oaks (a good thing, in this context), but also every animal on the site (not a good thing). Like Bill himself, his fires are small, intense, and you know exactly what to expect. The fire crew respect Bill, and they enjoy burning with him.

Lincoln's fires are another story altogether. Lincoln's plume is lighter because his fires are cooler, with one or two dangerously dark spots where areas are burning too hot, basically indistinguishable from a wildfire. (We also have wildfires, mostly because soldiers from Fort Bragg practice shooting flares without consulting the fire threat assessment for the area.) He prefers backing fires, which makes him—but only for this reason—a more conservative burner. Backing fires are lower intensity and do not clear out the oaks as well, but allow some animals to get out of the way. Lincoln will back a fire through 400 acres over the course of a day and a night, and often burns a thousand acres or more if the fire jumps the firebreak or the wind changes direction. But like Lincoln, his fires can be dangerous, unpredictable, and wild.

The fires are also a lot of fun! I joined Lincoln's crew for a burn in the drains, and he invited me to help survey the site. I didn't know what this meant, so I climbed on back of his ATV, tucked my feet in as best I could, and wrapped my arms around his waist. I was a bit troubled by the next part, as I was not expecting to shoot straight through the line of fire and into the burn, but thankfully, I had no time to process this event. He lit a drip torch and balanced it on my leg. We punched through walls of smoke and moving lines of blaze, running over downed trees at top speed and pouring out a swath of fire behind us. The fire line rushed up behind us in tall, coursing flames. My eyes were watering too much to see clearly, and there's not very much to breathe in a fire, so I just held on as best I could, and hid behind Lincoln's shoulder to shield myself from the roasting heat and smoke, breathing through his collar. He drove on, impervious to all these harms, and lit off the rest of the block behind us. I have never met anyone more reckless. I am enthralled.

Flames are mesmerizing but perilous. You want to be closer to their light and flickering dance, but they will burn you. As the flames consume grasses and ground cover, they turn the landscape to charcoal and spread out with the wind. Their movement invites chase, but their heat will throw you back. The air buckles and snaps, and heat hits you as painfully and as surely as well-aimed punches. Your skin stings and begins to cook, and you have fractions of seconds to decide where you need to be in case the wind changes, or in case it doesn't. Should the wind falter for a moment, you will find yourself in a choking sea of smoke, and you will find that there is really very little you can do to change your fate.

Standing next to a fire, a really big fire, will cause tempers to emerge from your personality that you might not ever have suspected were in you. Many things that would otherwise sound like bad behavior seem quite reasonable when you are standing next to sweeping, volatile peril. I am discovering loyalty to and respect for Fire Bosses I do not completely trust, though I believe from experience that loyalty outweighs trust in situations that are potentially life threatening. I also find that I feel much more alive on a fire than might be polite to run on about. Anyway, I'm having fun. I have until December to dwell on all this, or at least until the next Fort Bragg flare exercise.
Posted by Erica at 10:27 PM