A Couple of Jakes

Jake (henceforth “Jake” and “JakeOne”) and Jake (“JakeTwo”) were best friends in college. They are both from Illinois, but they met at Murray State in Kentucky. JakeTwo has continued on as a Masters student in herpetology there. JakeOne has abandoned for the wild beauty of North Carolina. They are both fire technicians, they are both talented biologists, and they are, for the time being, my roommates.

At home, JakeTwo refers to OtherJake as “the drawling Hoosier.” Both of them enjoy harping on my mistake in thinking that Hoosiers are from Illinois. “Easygoing, drawling Hoosier,” I correct, refusing be misquoted. “We don’t drawl,” drawl the Jakes. At work, we distinguish between the Jakes by calling them Jake and Jacob, because they need to have different names on the fire radios. As “indelicate” as the fire crew can be, they recognize that it is wrong to use “JakeTwo” as a signifier for our newest Jake, and so call him Jacob, which is not his name. Touching.

Jake has offered to be called “Jeff” for historical reasons. Last year, there were eight Jeffs, but the new season of hires left us with half that. Jake recently got hired onto the fire crew permanently, earning him the title of “6362.” This, of course, means that JakeTwo will now be “Jake,” and Jake will be called “Six-three-six-two.” Confusing? Try listening in on the fire channel when Lincoln (Fire Boss 646—spoken as six-four-six) calls his fourth crewmember. “6464? 646. 6464… 646.” “646—6464 here.” Our Jake degeneracy is trivial.

Regardless of what we call them individually, everyone likes to refer to the Jakes as “a couple of Jakes,” which, in hunting terminology is a pair of immature male turkeys. Oh yes, as you might expect, the jokes are endless. Among the mildest: “You caught yourself a couple of Jakes,” says my boss, a Jeff, as they walk by. “I’m holding out for a Tom” is my standard retort.

JakeOne is a tall, blond farm boy who grew up raising cattle, and also hell. He loves slow-pitch baseball and thinks vegetables are some sort of mean joke. And as I have mentioned, he is fond of snakes and photography, and terrifying combinations of the two. I am including links to some of his photographs below. There was a night at the house when an Eastern Hognose slid up to me as I was returning phone calls, and I called the guys out to take pictures. A hognose is not poisonous to people, but it is not small, either, and it puffs itself up, gapes, hisses and rattles like a poisonous snake. It will also mimic a cobra, which can cause you to panic if you are at all normal. Jake lay down on the ground next to the hognose and took about a hundred pictures with the snake striking at him. Every picture JakeTwo and I have of this snake has a piece of Jake’s camera lens or Jake himself in it. There is only so close sane people will get to any sort of wildlife regardless of toxicity, but Jake is apparently unaffected by this convention. 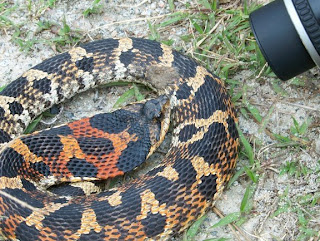 Jake immediately impressed me as a wild man, even before I met him. I had been living in the house with him for a number of days before I even saw him. I heard him coming and going, but as he never used the bathroom or kitchen or anything contained within these walls, I had to meet him at work. Events since then have reinforced my first impressions, as when I returned from shorebird surveys to find Jake, surrounded by a group of tired and wet men, skinning a four-foot catfish that he had nailed to the house. Some of the guys had gone hogging—also known as “grabbling” and “noodling”—which is a sport where you walk through a river and stick your fist under rocks until a large fish grabs it in its mouth, at which point, you try to hoist the thing out of the water and wrestle it until it is dead. Yeah, I’m not kidding. You have to let it bite you and clamp onto your wrist, because a catfish is too slippery to hold onto otherwise. An added benefit of noodling around here is that the water is so deep that you need someone to stand on you to keep you down on the riverbed while you are doing this. (Lincoln caught this one with Rupert standing on him.) Oh, and have I mentioned that this is snapping turtle country? No? Watch your fingers. 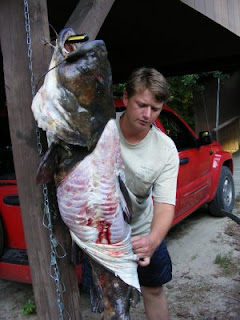 I tried to skin one side of the catfish, but Jake was cleaner, faster, and had his side skinned and filleted in a matter of minutes, before I even got done assessing the subdermal physiology of the fish. My side was bleeding like a freshly slaughtered cow, and I had the better knife. We had a 30-pound fish fry at work two days later, which might be the field-station equivalent of an office party with a swarm of cupcake-baking secretaries. Why does our workplace have its own deep-fat fryer, you ask? There are no simple answers to questions like this.

JakeTwo is shorter, darker, and tough as titanium jerky, but he has a warm smile and a sometimes-friendly if constantly obscene nature. This is a conversation I overheard between JakeTwo and my boss, and is fairly representative of conversations with JakeTwo:
“So, you think you’ll try your hand at grabbling next time ‘round?” questions Jeff.
“I gotta be honest with you, I just don’t think my testicles are big enough for that,” answers JakeTwo, as directly as possible.
Jeff, not exactly used to being addressed like this, thinks for a minute. “Maybe you could use them as bait?”
“Sir, they’re not even big enough for that.” I won’t transcribe the fire crew conversations that involve JakeTwo, but they are funny. You get the idea.

JakeTwo is also NASCAR fanatic, so his move to North Carolina is a trip to the Promised Land; a homecoming for the True Fan. Through playing NASCAR 07 on the PlayStation2, and watching movies like Days of Thunder and Talladega Nights with JakeTwo (these are basically the same movie except for a puma named Karen, and you can see shots of Rockingham in them if you are curious), I have learned the differences between open-wheel and stock-car racing, what makes a good driver, how you “line up under caution” behind the “pace car,” and how each of the NASCAR raceways differ in terms of shape, turn characteristics, surface friction, and so on. For example, our Rockingham raceway, “The Rock,” has unique track bed characteristics that make it sort of a gem of NASCAR tracks. The Rock is also narrower on one end than the other because it was built to accommodate a small and now non-existent wetlands on one side of the site, so each turn requires a different driving technique and strategy to get through. This is one of those details I cannot help but laugh about, as NASCARs get 4 miles to the gallon, and have a major impact on the local environment. Somewhere there is a point that is being missed.

For his Masters research, JakeTwo tracks and captures cottonmouths alone in remote areas. He should be wearing his medical bracelet with information as to his antivenom allergies, but he isn’t. “They can kill you with their venom, they can open their mouths almost 180 degrees and bite you from any angle, they’re lightning fast, incredibly strong, and they still have six defensive mechanisms so that they don’t have to attack you,” he says, when I ask him what he likes about cottonmouths in particular. I guess there’s something likable about all that, though I still run the other direction when I encounter one. He wants to end up in the Everglades. “Big, flowing water, big snakes,” he says, with that reserved passion of someone who truly loves his work. I’m sure he’ll get there eventually, but we have cottonmouths, and he has a snake hook, so he just might see fit to stay for a while.

What else can I say? The Jakes are good roommates. I am a fortunate girl.


Living in Constant Terror,
Erica
Posted by Erica at 3:37 PM