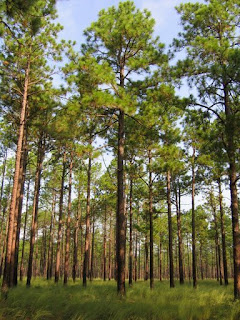 I began a series of letters when I moved from Massachusetts to North Carolina. I couldn't have prepared myself for the move, or what I would be doing... I was more used to cities than wild areas. I knew no one, had no family in the south, but even though it was a big chance to take, it was worth it.

I'll start posting the letters I wrote home, sequentially, over the next month or so.

I have arrived safely in North Carolina.

I live in Rockingham, a town with its own Wal-Mart. Nine thousand people live here, and I'll give you one guess where you can find them. I live in the bird sanctuary on a gorgeous lake. We are overrun with birds, lizards, and dragonflies. I work in Hoffman, a town of 600 people. They have a rusty water tower, and that's about it… a post office that could fit into my current bedroom, and two gas stations. Though in Rockingham proper, it appears that Hoffman has a raceway that seats 78,000 people, but since the raceway was closed down in order that a much larger, 115,000-seater could be built further north, there's not much going on out there. I will say that after a day in the Sandhills, I am happy to see these signs of "civilization."

I live with a fire technician named Jake, who, like the rest of the burn crew, has a slightly cooked look to him. Jake is an easy-going, drawling Hoosier who enjoys taking extreme close-ups of deadly snakes. He knows an incredible amount about the local wildlife, and we spend nice evenings out on the porch with our binoculars and field guides, when we are not watching "the Channel," in this case CBS, and scrutinizing "Survivor, Fiji" for wilderness survival tips. Occasionally, other scientists stay here with us, and some sort of bizarre two-for-one sale brings us a second "fire-technician Jake" next month as our final permanent roommate.

Day One in the Sandhills Wildlife Depot managed to seem both completely ordinary and completely foreign simultaneously, making me think that I have not quite resolved into which of the "many universes" from quantum theory I am destined to inhabit. There was the normal paperwork to fill out, I-9's to file, direct deposit forms, and so on. For the project, papers on Bachman's sparrows and Red-Cockaded woodpeckers to collect and study, field equipment to gather and store in the field truck. This time, I have a tow-chain and snake chaps in addition to clipboards, data sheets, and nest-monitoring tools. At lunch, though, I was sitting down with men named "Rupert," "Lincoln" and "Lee," sharing the cornbread and stew. I remarked that the vertebra that I happened to be chewing on seemed awfully mammalian. A long pause. "That's whah ah shoot mah rabbits in the heyud," offered Lincoln obliquely, spitting out a piece of lead shot. That guy cracks me up.

Later in the day, we visited the sites I will be studying. Most of them are Longleaf pine restorations, host to trees sporting hundreds of goofy green pom-poms and some very rare birds. There are also "the drains," which seem to be some sort of hell reserved specifically for ornithologists. Each site offers particular challenges, but let me back up a little.

North Carolina has taken a cue, perhaps the wrong kind of cue, from Smokey the Bear, and has introduced into the conservation panoply "Burnin' Bob White" (a small quail with a large rake) and "Drip Torchin' Tom Turkey." Go ahead and read that out loud. Drip-Torchin' Tom Turkey is a biologically accurately drawn turkey, wing outspread, pouring burn fuel on the ground with a tool that might be recognizable to fire technicians, but otherwise requires the unlikely name of its possessor to provide a clue as to its function. I know it sounds improbable, but this is North Carolina's plan for converting the masses to the environmental mindset. Given what I've seen of the predominant culture here, I think they might do better with Jesus in flame-retardant robes, or Jesus in a burning pine forest, or even just a bumper sticker proclaiming "Drip-Torch for Jesus!" But maybe in the course of questionable conservation practices, the pyromaniac holiday bird is not so bad. Let me offer this entry into the category of most questionables: "Chomper."

Chomper is the adopted child of the environmental movement of the 1960's and 70's, when conservation was apparently done by swap meet. At some point, Florida walked away with some of North Carolina's turkeys (unfortunately, not our famous drip-torcher), and we received "Chomper," a 6-foot gator that was placed into the Sandhills conservation area lake. This with the aim of making skinny-dippers and revelers think twice about whether they would like to lose a limb along with their clothing and inhibitions. A testament to the take-no-prisoners strategy for conservation, it did work, but now we have a lonely alligator, far from home, who basks in the too-cool Carolina sun. Does he dream about the long walk back to Florida and the clear blue swimming pools that await his return? I wonder if he longs for those vast, open golf courses and the slow-moving prey they offer, or looks up at the sky, to ponder "Why is there only me?" Did we rip him untimely from a more sophisticated world, where he feasted on marshmallows and wrestled with Attorneys General-to-be? "What do I do to avoid Chomper?" I ask naively, thinking that they are putting me on, that there is no gator. "Git out of the truck on this sahd and run fir the first hundred meters. You outrun 'im, you'll be jest fahn. Those snake chaps maht slow you down, but then agin, so maht the snakes." "Will he really come after me?" "Maht could be." Just like a scientist to talk in meters.

End of Day One.

I shouldn't be so down on the conservation around here, though. They do an awfully nice job of it. Next installment, Chiggers Debunked! No, they don't burrow into your skin! Or maybe I'll actually get around to saying what I'm supposed to be doing here. Take care of yourselves, and I promise to do the same.

There's nothing like receiving a friendly letter in the mail.

This is much more like it. Way better than email. Though I would request you render your regional speech with standard spelling so we can understand it, we can mentally fill in the accent. Also, hi Roger.